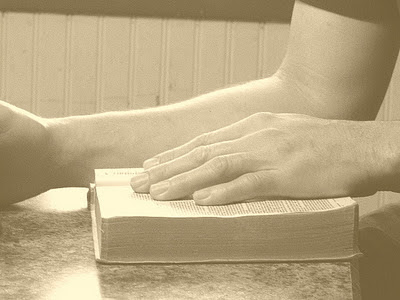 I realized today that I am bargaining. I think I forgot that verse about God's thoughts being higher than my thoughts.*

Why, God? Not blasphemous, just why. Why couldn't people have been saved without Trent dieing? Why couldn't people have been taken deeper in their walks without it being my son? Why did I have to love him so much? Why does it have to be ten months later? Why does it have to hurt so much now? Why can't I have that peace and joy and certainty of heaven again? Why does this battle rage so hard? Why is there such an intensity to doubt? Why can't eternity just begin now~ wouldn't it be a perfect day for Jesus to return?*

I was even toying with the idea of exchanging those promised rewards*~ maybe I could trade them in for what's behind curtain number three and we could all go back to last February. Curtain number three may have been eighty years with my son whom had never gotten saved. Eighty years here or eternity at age twelve . . . Eighty billion years from now I would have gladly picked his eternity to start now.

My thoughts go to Jesus' temptation in the desert.* That separation from all that He knew, to be tempted when He was at His weakest point by Satan himself. What sustained Him was the Word of God, the ministering angels, the Truth, the hope, the joy set before Him. How revealing temptation is; I don't like revealing.

I've realized that at some point I have to let Trent go. I feel like I am in a tug of war: Trent pulling me heavenward, and everything else pulling me back to this world. Somehow I have to embrace living here again; yet the thought makes me want to puke, literally. So instead I somehow think that staying in bed, or finding a comatose state for my brain of not feeling, might help.

Every project I even think of immediately reminds me of the fact that Trent took nothing with him to heaven. Everything here is temporary, and only what is done for Christ will last. I don't have the energy to invest in temporary things anymore; yet at the same time I find myself coming back to thinking that the next temporary thing really will bring complete satisfaction and would be worth investing my time, money and energy in . . . only to know, deep, deep down, that it won't. So how do I live the rest of my life? Why am I still straining for earthly glory? Why am I not pressing into God harder?

Or maybe I am, and the pain that I feel is really the disappointment of the reality of this world which I have trained myself to be so comfortable in all my life*. Maybe the pain is because I can't lie to myself anymore and think that achieving the highest heights here matters so much. Maybe I really just want to go back to living how I was a year ago and be content by only crossing off the next project, but I know at the same time that I can never deny the truth that I have seen. Maybe I am grieving what I thought was reality for thirty-some years. Maybe I am finally being forced to acknowledge where my allegiance lies: my own selfish self, or God.

I am where I am, and that is grieving my son, as my sister reminds me if I try to justify anything. Those sisters~ they don't let you fool them. Grieving my son: I hate the words, yet I love the God he's with. God doesn't accept bargains; but He holds breaking hearts.
* Isaiah 55:9, Revelation 19, Revelation 22:12, Luke 4, 1st Corinthians 3:12-14
Posted by OurCrazyFarm at 11:40 AM