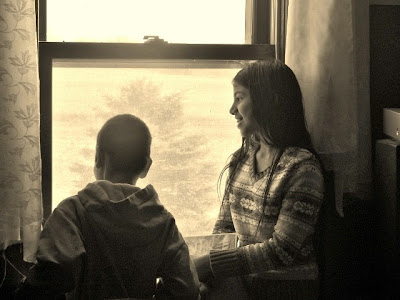 We are in the midst of a sizable Wisconsin snowstorm. The weather man is predicting 6-8 inches of snow within a twenty-four hour period. He didn't realize that we had two Christmas programs scheduled for today, or the consequences in our household of having to cancel them.

He probably didn't realize, either, when he was making his guesses, that for the past two years we have had snowstorms on the very day that these same programs had been scheduled. Or that the blowing winds and fast falling flakes would result in an avalanche of emotions for this grieving mother because, as if the holidays aren't hard enough, the last days of Trent's life seem to be relived all over again the closer we get to yet another anniversary date.

The same snowstorm, same programs, but all overshadowed by the missing of a child. I just couldn't endure going today. So I cried in the bathroom instead. And blamed the weather. The predictions told to us at the beginning of this journey are proving to be right: grief gets harder rather than easier. The second year is worse than the first. And I can only imagine that we have the rest of our lives to fight this unending battle.

My sister calls it Chinese water torture. Drip. Drip. Drip. Just like the faucet in our bathroom. Drip. Drip. Drip. It's all the little things that will drive you crazy. The old shirt that has been left in the hamper for twenty-two months. The bunk bed that the boys insisted on setting up again. Eating cheese puffs and reading a book before bed. The thought of taking pictures for Christmas cards. Or cutting a tree from the woods out back. Or buying only four pomegranates for the stockings on Christmas morning. Drip. Drip. Drip.

So I got out the Bible. And went to Ezra with the kids. The old people cried, and the young people rejoiced after building the temple foundation. I guess I'm lumped in with the old people because it seems crying is all I'm doing these days. After I cried some more, I sent everybody outside.

Sliding and snow forts brought smiles. Hot chocolate and cookies helped, too. And then Rob came home and announced that the roads were horrible. And we discussed heaven, and just how long eternity is going to be, and how good God is.

And I realized, in the end, that God had something better planned for this day. Something that couldn't be found in make-shift sanctuaries full of little boys dressed in bathrobes and tween-girls pretending their name was Mary. Nor could it be found in beautiful Christmas songs that have been rehearsed for months with good friends. It took many tears, and many snowflakes, to ultimately find Him.

Posted by OurCrazyFarm at 10:36 PM