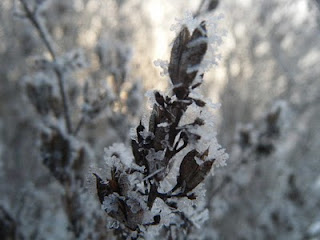 Six below is the predicted high for the day here in Wisconsin. Which means that, at least twice a day, we get to bundle up and brave the elements to care for our menagerie of critters. Enduring a nearly eighty degree difference in temperature, and a frozen water spicket, all for the sake of having some home grown beef in our freezer. The thought of a little corner lot in town with a plastic goldfish floating in a bowl has become appealing and common dinner conversation as of late. Or at least goat farming in the Bahamas. There must be a need for handmade soaps and milking Nubian does somewhere in the Atlantic region.

To pass the time of these cold days we work on home school: adverbs and adjectives, transitive and intransitive verbs, algebra and phonics. Character and self-control are highest on our list of curriculum in four young souls (not to mention my own), and seems to be the subject that constantly demands the most attention. Two teenagers and two middle schoolers in one old farmhouse in January makes for many opportunities of growth, and throw in there the dog that constantly needs in and out, in and out, always just as you've settled nicely into the recliner. Each with our own strenths and weaknesses, as iron sharpens iron, we go on .....

Winter is also a time for quilting. Somehow, I have gotten four baby boy quilts behind in my gift giving this past year. Three tops are ready to be stretched and sewed together, with more quilt patterns running through my brain than I could attempt to sew all year long. It's been nearly two years since I could even think of quilting. I'm not sure if that's the first glimpse of the healing they say comes eventually in grief. If it is I think that's why I resist it so; I never want to be healed of missing my son and thinking this is normal. So I sew between the tears.

And cry over hatching chicks. Chicks that haven't hatched in an incubator in my dining room for nearly those same two years. The pipping hole found me crumpled on the cherry laminate next to the table while the house was quiet and the sun hadn't peeked out yet. Crying as I longed for feather legged chickens like the one's we picked up a week before the accident. Crying because there might not be feathered legs, crying because I'm tired of waiting for eternity to begin.

As I often do when I need solid encouragement of Scripture, I searched for the Desiring God blog, and found Jon Bloom's post on Jacob's time of wrestling with God to be so applicable.

"And what changed him from fearing man to trusting God’s word was prolonged and painful wrestling with God. Sometimes, in your battle with unbelief, your greatest Ally will wrestle you — he might even make you limp — until you’re desperate ... "

There is so much of "me" left. The pain reveals where Christ is not yet ruling. Where I still expect something else to satisfy. Where I still refuse for Jesus to be enough.

After I've cried the tears, and realized the beauty of the battle is that the end result will eventually produce a harvest of righteousness and peace (Hebrews 12:11), I raise my hands in defeat. I can no longer struggle as Jacob did and demand more from God. My strength has been drained from the energy it has taken to resist Him thus far.

Instead, I accept the blessing that has already been given: the blessing of suffering.
Posted by OurCrazyFarm at 10:37 PM