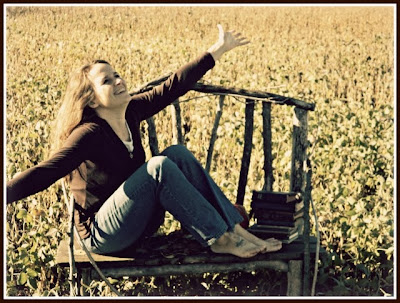 It's weird having your picture taken. It's weird to look at pictures of yourself. It's weird to post pictures of yourself on your own blog. As a camera fanatic, I am much more comfortable with the gadget in my hands rather than pointed at my face. But, like I keep telling the children, you'll need some photos for my funeral one day. I'm doing my best to ensure that there are shots without the double chin or sagging arms. Use this one, kiddos. Somebody blow it up and put it right on top of my casket. Let it be what you remember of me. May it be what I strive to live like before you, rather than the sulky mother that I've been.

Don't think I'm going suicidal, I'm not. I've just been reading a book by a man who has been in heaven for over three hundred years. (Three hundred years. Just let that concept sink in for three seconds.) He shares about his longing for that eternal rest, his desire to know God perfectly, spirit to spirit. He thought he was going to die so figured he should start thinking about such things. Turns out he didn't pass as quickly as he figured and ended up writing more than just his own funeral sermon but a four volume essay on heaven and the saints' desire to be there. Every turn of the page brings tears. Then conviction. Then that deep sighing that has been present for so long. That unsatisfied longing for God.

"Can any soul that hath made God his portion, and chosen him for his only happiness and rest, find rest in so vast a distance from him?"

The universal longing of a Christian's soul to be in God's presence struck me last night at the supper table. Poor Rob, he gets all of my out-of-the-blue, unsorted, confusing blurps, "God revealed the same thing to Richard Baxter as He has been revealing to us: the longing for God's presence when He will dwell with His people." A foreign concept to the world, one only fools would believe in and bank on. If that's the case, then call me the biggest fool of all because I'm waiting for the good stuff, folks. I'm setting my sights on Heaven. I'm waiting impatiently for it and this book isn't helping.

Richard Baxter, The Saints' Everlasting Rest. It's good stuff.
Posted by OurCrazyFarm at 11:19 AM