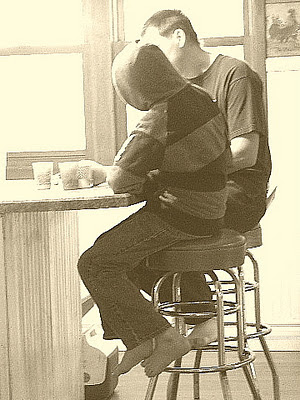 As I was making the bed a while back God impressed upon me that I was the lucky one (as in the definition meaning "favored one") . Grief longed to consume that morning; the impression had been preceded by many tears, prayers, and waiting for strength to start the day. As the tears continued, the blessings that come with suffering began: I realized that I can't even get out of bed in the morning without the thoughts of heaven and eternity; I can't begin my day without coming to terms with God; I no longer consider my days my own, let alone my dreams, ideas, or my very life, but wait for God's leading.

"Lucky" is having your eyes opened to God, no matter the cost.

I spoke to a young man the other day about Jesus. My walls had been built high and strong, and I had vowed there would be no break in them for my own protection, but then this young father broke all protocol and walked over to where I stood alone. After the small talk, I asked the all important question, "How's your walk with God?"

We've all learned the game, the game of Sunday smiles and every body's saved; life will go on forever anyway and there's always tomorrow to ask and decide. But life doesn't go on forever, and tomorrow may never come. The facade of the game is shattered, and I can't stomach the rules of it any longer. A bit of digging revealed the truth, to both of us. Game over. Now truth can begin, truth can be said, fears are revealed, honesty is given words, genuine prayers can be lifted for a brave man who is walking the line of no decision being a decision that one day he will wake up to the realities of.

I talked to a mother a while back. She wondered how you get to where I am; I wanted to ask her where it is that I am. Please tell me, because I don't always know.

Where I am is clinging to God. Where I am is battling, moment to moment, for grace to believe, to trust, to hold-on. Fighting for breath, literally; fighting for reality; fighting to see beyond this world to a sovereign God who holds it all in His hands, including me. Where I am is on my knees, begging for strength. Where I am is in the Bible, constantly repeating the words and promises, trusting in them. Where I am is looking intently for God's glory, now as well as future. Where I am is believing in the One who gives and takes away. Where I am is waiting for Jesus to return and make this all right; waiting for the curse to be lifted and for the tears to be wiped away.
As the tears flowed down her face, all I could ask her was if she trusted God with her teen-age son's life. That's all that I'm doing; that's where I am.

I have been reading Uncle Tom's cabin by Harriet Beecher Stowe. When I remembered part way through that the little girl dies I almost quit reading, but I am so glad that I have continued. As much as the book is about the atrocity of slavery, it really is a testimony of the gospel at it's core. After Eva's death, the author says:

Some battles are won even before they are fought; other battles continue for years. I think of Trent's short life: he was a child his whole life, he never tasted of the cares and concerns of adult trials, or battled the battle's of years worth of sins. His was the "crown without the conflict".

I realized the other day that I could potentially live another 50 years . . . waking up every morning for another 50 years to fight for the victory of this battle. I thought of the blip of our lives on the screen of eternity. How would you even begin to measure eternity? And where would 12 years, 50 years, even 88 years fall on that line? In the grand scheme of things, isn't it the other side of eternity that matters? Isn't it where we are on that side that we should be more concerned about rather than our short time here?

Another line from the book was said by Eva's father, St. Clare, shortly after his daughter died. He had been indifferent to the gospel his daughter continued to share with him, until he had to come face-to-face with who this God was and what eternity held. He said, "I am braver than I was, because I have lost all; and he who has nothing to lose can afford all risks."

Eleven months ago I held on to this world and it's trinkets with a tight grip; I have been forced to let go. Actually, it was God's mercy that released my grip; it was a direct answer to prayers that Rob and I had been praying for right before the accident. Prayers for God to wake us up to Him; prayers to draw us closer, to know Him deeper, to live our lives for Him, to use our son in a mighty way for the gospel. We are braver now, because we have lost all. We see eternity clearer now, we see God clearer now, we see our short days clearer now and are counting the cost of how we live them. There is nothing in this life left to lose; we can afford all risks that hindered us before from trusting God, knowing God, telling others about God.

St. Clare asked Uncle Tom at one point, "How do you know there's any Christ, Tom? You never saw the Lord."

I feel Him in my soul; feel him now. I long for the day I will see Him with my eyes; see what Trent see's; know what Trent knows. Fifty more years here does not thrill me; the sooner I see my Savior face to face the better.

Second Thessalonians 1:10 says that those who have believed will marvel at Jesus when He comes in His glory. Marvel at Him. First Peter 1:5 says that God Himself is a shield through faith. As the waves of grief consume, the panic attacks, grasping for breath, flashbacks of hospitals and policemen, I envision that shield of God Himself surrounding me. The enemies arrows are poised and thrown, but the shield of God protects. I hold on to God's grace that He continues to give; His eternal encouragement and good hope (2 Thes 2:16). Eternity is where my eyes are focused; eternity is what I continue to look forward to.
Posted by OurCrazyFarm at 12:06 PM